Hello all. It’s Nance… the geeky homesteading side of Homesteader’s Supply… Jerri is still in Chino Valley, AZ while I and my family have recently moved from Chino Valley to Arena, Wisconsin. The move was for many reasons, one of which was that homesteading in the dry Arizona landscape was super expensive and almost impossible in many respects.

Gardening was super challenging… I tried straw bale gardening, in ground beds and container gardening… none of which offered enough harvest for canning and all of which required at least twice a day watering.

Then there was the challenge of having livestock in a land of no pasture grass…. We bought hay year around and with two dairy cows, a horse, a goat and two dairy calves, the feed bill peaked at $1,000.00 per month. Each time gas went up… so did hay prices because all of it had to be trucked in… then when gas prices when down – however hay never did go down in price… What was an $8.00 bale of hay is now a $22.00 bale of hay!

Along with the homesteading issues we faced… we were also looking for a school for my son to attend for auto mechanics… so we pack up the house in to a U-Pack truck and load Cookie cow and Do, the horse into the trailer and set sails to Wisconsin where we had a college for Matt and green grass for the furry kids, along with the hope of easy gardening!!! Little did we know we were moving from the driest place on earth to the…. second driest place on earth! 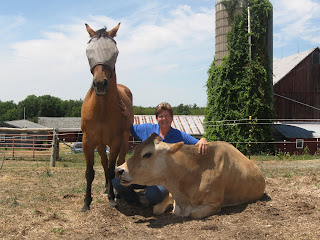 Our trip was welcomed on day two with 102 degree temps in Missouri and day three offered 106 degrees in Illinois. To say it was hot in a pickup and civic – both with no air conditioning – is an understatement!!! We bagged up ice into Ziploc bags for the cats to cool off on. We wrapped ice into bandanas and tied them around our necks to keep us somewhat cool. We arrived into Wisconsin during the worst drought since the 1950’s! The pastures we planned for Cookie and Do was now brown and void of nutrition.

So, how do you tend to livestock during a severe drought????

I ask because we ran out of transition hay for the furries and had to resort to buying cubed Alf Alfa hay… I have yet to find a store that has any hay to sell and need to make sure these two have some food with nutrients!!!

How are all of you fairing in the drought????

Here’s to hoping for rain and a quality hay supplier by fall for a winter stock pile! Despite the drought, we are all very happy with the move and look forward to a good hard rain!!!