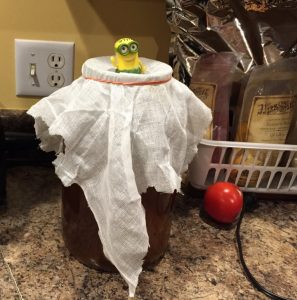 Freshly made Kombucha fermenting on the counter with a happy minion!

The weekend right after Thanksgiving was my time to start thinking about healthy eating again. Right after the all the stuffing, and potatoes, and pies, and ice cream…  guess I don’t have to go on, you probably get the drift.

About 2 weeks ago a friend gave me a scoby, or starter culture for making Kombucha.  I watched him drinking Kombucha every time I saw him.  Then of course, I had to start buying it again at the grocery store which can get expensive.  I love the different fruit flavors and the fizz.  It reminded me of how delicious my Kombucha was when I made it about a year ago, but as usual, I got so busy I stopped making it.  I bet all of us have had an experience like that… dropping something that is good for us because of the “I’m too busy” reason.

Now that my fresh Kombucha has fermented for about 10 days or so, it was time to bottle it up. I had just shy of one gallon of Kombucha which filled five 16 ounce e-z flip or grolsch bottles. So I thought I’d share my recipe and process so you could see how relatively easy it is.

What you need to for making Kombucha 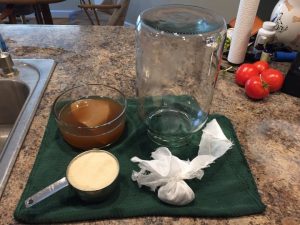 I allowed mine to ferment for about 10 days.  I could see some bubbles at the top, and I could see that the mother culture was now floating on top… a good sign. 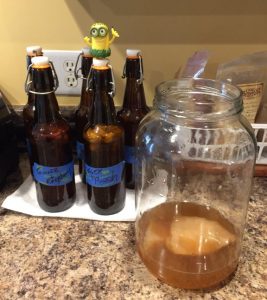 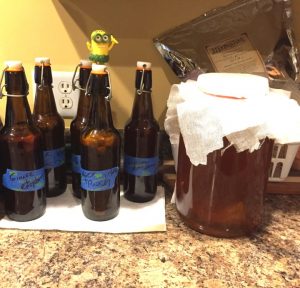 When you open your bottles of Kombucha, you will enjoy a variety of fizzy fruit flavored beverages that are so enjoyable to drink and healthy for you too!   Enjoy…    jerri

Anyone can learn to make better butter!

There are two options in this article: making your own butter from scratch, or improving on the butter you buy. You may ask, why would I want to improve on the butter I buy? Great question!

REAL butter is a wonderful product! Years ago, they used to tell us it was bad for our health, but research has shown otherwise. Today, we know that REAL butter is actually a healthier fat than those manufactured products with chemicals and dyes and hydrogenated molecules that can potentially lead to cancer and heart disease. 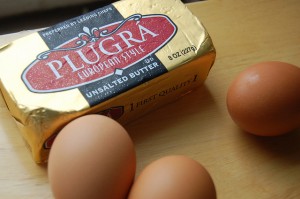 Now that we know that REAL Butter is good for us, we can teach you how to make it better. This is a project that you can even enjoy with your kids. Basically, it involves creating a variety of flavored butters by adding ingredients like fruits, nuts, spices and herbs. The options are endless and entirely up to your imagination.

So here we go… END_OF_DOCUMENT_TOKEN_TO_BE_REPLACED

Once you try your first bottle of store-bought kombucha, you’ll probably become a fan for life. No, wait…scratch that. If you’re anything like me, you’ll get hooked and become a die-hard kombucha addict! At $4 (or more) for a 16-ounce bottle, your habit is going to become more expensive than a latte fixation. And then, before long, you’re going to find yourself Googling “how to make your own kombucha at home,” just like I did. 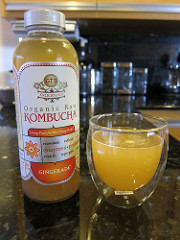 For the uninitiated, kombucha is a fermented beverage made from sugar, tea, and a living kombucha culture. Unflavored kombucha is both slightly acidic and slightly sweet. The longer you brew it, the less sweet it becomes because the kombucha culture continues to feed on the sugar in the tea and uses it up.

When brewing is complete, you can add ingredients like ginger, herbs, dried fruits, dried flowers, or extracts to flavor the drink to suit your personal preference. Fizzy and refreshing, kombucha makes a terrific substitute for commercial carbonated sodas.

Kombucha Is a Health Tonic*

Kombucha detoxifies the liver and dramatically boots immune function. Like all fermented foods, it’s alkalizing and makes the body more resistant to degenerative diseases and cancers.

The wide variety of complaints relieved by Kombucha is almost not comprehensible. But it is explainable on the basis that Kombucha does not target a specific body organ but, rather, influences the entire organism positively by effecting a stabilization of the metabolic situation and the detoxifying effect of its glucuronic acid. In many, this leads to a heightened endogenic defense capacity against those toxic influences and environmental stresses which inundate us from many sides. The result is the invigoration of a damaged cellular metabolism, and the restoration and firming up of one’s well-being.

It All Starts with a SCOBY

One of the first things you’ll discover is that the kombucha brewing process begins with a weird, slimy thing called a SCOBY. Remarkably, the SCOBY — which looks like a flat rubbery mushroom — is what gives kombucha its famous, health-promoting benefits.SCOBY stands for Symbiotic Culture of Bacteria and Yeast, and it’s the secret ingredient that turns sugar-sweetened tea into kombucha.

All over the internet, you see kombucha brewers obsessing about their SCOBY. Is it healthy? Does it float? Does it sink? Does it stink? Does it have black spots? The list of things people worry about is practically endless. But, truthfully, there’s no need to worry if you start out with a top-notch SCOBY and follow the directions carefully. 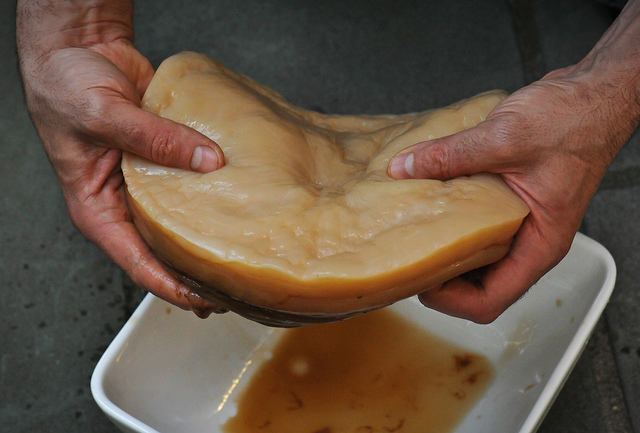 Our kombucha making supplies are of the highest quality, and we think our SCOBY is the best on the market. We get our freshly grown, organic SCOBYs from Kombucha Dave, and when you buy your kombucha products from us, you get a discount, plus all the instructions, videos, and support you need to brew your own kombucha for life. 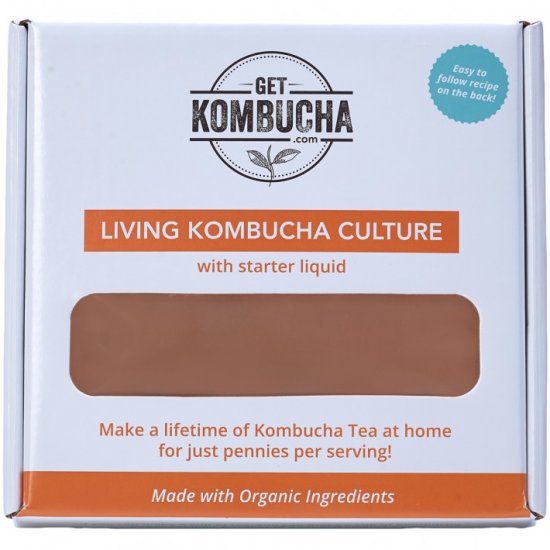 About the Brewing Process

Simply stated, to make kombucha, you add your SCOBY to a gallon jar containing sweetened tea that has been allowed to cool. It starts out looking like this: 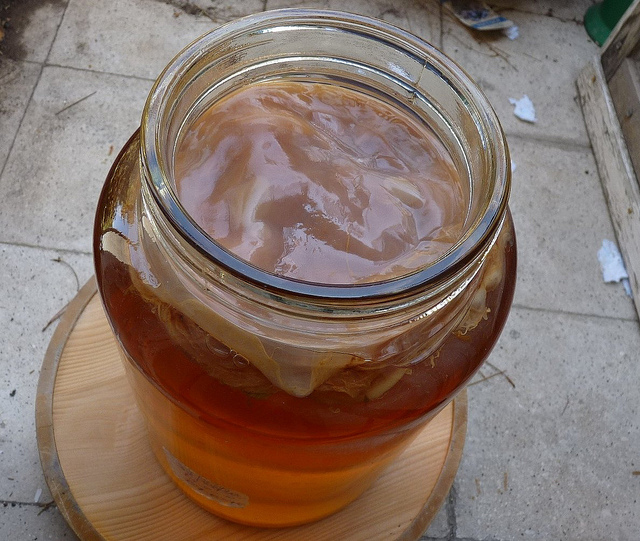 Then cover it, and let it sit in a clean, warm place like on your kitchen counter. In a few days, it’ll be ready to drink. Best of all, you’ll have an unlimited supply of kombucha for just pennies a bottle. 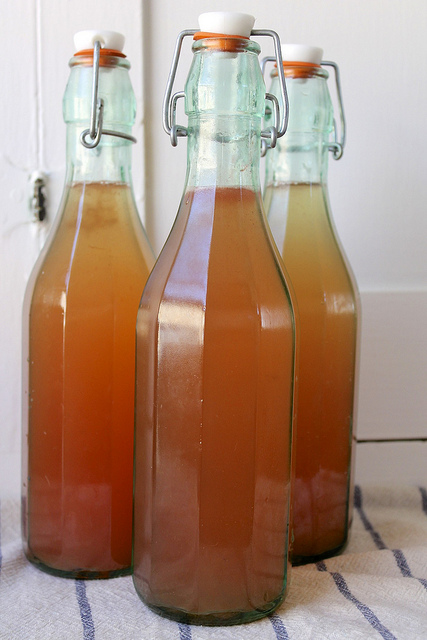 Our good friend Kombucha Dave has a fascinating article on his blog where he talks about why a SCOBY is sometimes mistakenly called a mushroom. He has kindly given us his permission to republish it here. Enjoy!

Is Kombucha Really a Mushroom?

No it is not, maybe at most it could be called fungie, or a type of fungi. I’m a type of fun guy, but again you can call it a Kombucha mushroom, we refer to it sometimes on our site as mushroom tea, mainly because that’s how other people refer to it. So if you’re at a party and someone says, “oh this kombucha mushroom tea is awesome”. Don’t take the bottle and spill it on them and say it’s not really a mushroom, but let’s talk about how it got it’s name then.

How did Kombucha turn into mushroom? Well the theory is, the story goes like this, in Japan, they were brewing something with seaweed and ‘Kombu’ actually means seaweed in Japan and ‘cha’ means tea. So it was originally called seaweed tea, and they were using seaweed, it wasn’t Kombucha, but a culture came about. Something to keep in mind, there’s lots of things to ferment that will form a culture, but not necessarily makes it Kombucha, make sense?

A mother vinegar forms a culture, you have sour dough starters, wine uses cultures and things like that, so eventually what happened

is that at the same time, people were also doing Kombucha tea. They saw the culture, so I’m looking at the seaweed culture we called Kombucha and I’m looking at this Kombucha culture and I’m just going to label it Kombucha, so there you go. In addition to that, to make things even more confusing, if you ever look at a Kombucha SCOBY or a Kombucha culture, I kind of think it does look like a cap of let’s say a portobello mushroom, so again hopefully that answers your question, is Kombucha a mushroom.

Also, I’d like to think that it is called kombucha mushroom because it looks like a mushroom and the texture is similar to a mushroom’s texture.

* Per FDA regulations, we can’t tell you about the health benefits of kombucha without also disclosing the following:

Legal Disclaimer  Information about the health benefits of kombucha is for educational purposes only. These statements have not been evaluated by the FDA. This information is not medical advice, nor is it intended to replace the advice or attention of a qualified health-care professional.

It’s Homesteader’s Supply week! We are giving away the Fermenting Kit AND a $35 gift certificate! 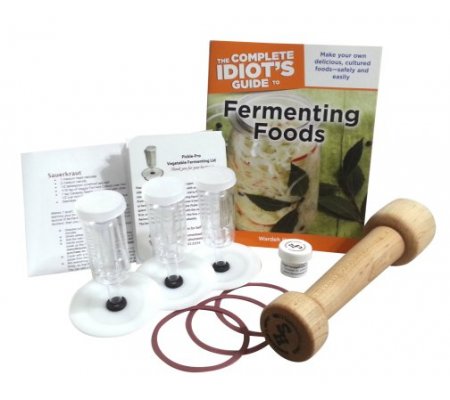 Homesteader’s Supply and Countryside & Small Stock Journal invite you to preserve the harvest and reap the many gifts the earth provides this time of year. Click on the photo or link above to enter.

Enter weekly to win a prize package from one of our sustainable living sponsors. Your weekly entry will also be included in the grand prize drawing (value of $5,000) in September! 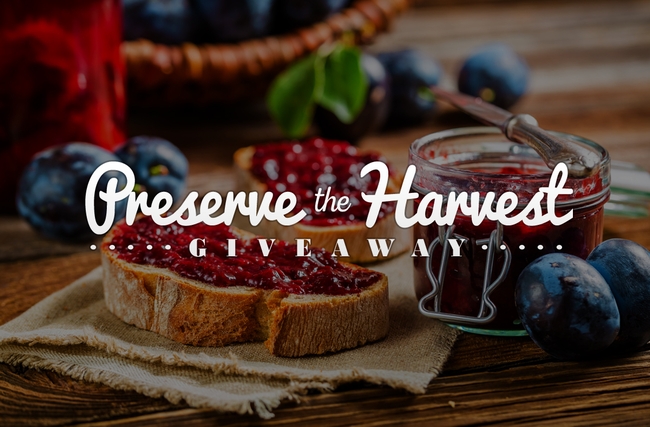 In the Kitchen with Prepper Pro 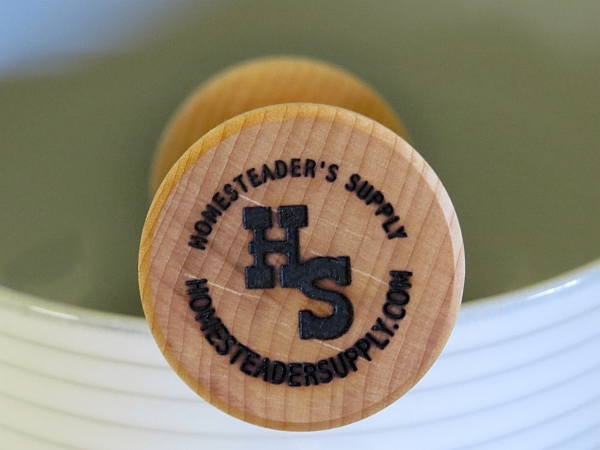 The Homesteader’s Supply logo is branded on each Prepper Pro

This morning I woke up with enthusiasm and dread. It’s a food day. Mushrooms needed to be cleaned and dehydrated. Beans were waiting to be picked, blanched and frozen. The blueberries were taken out of the freezer last night to thaw and needed to be made into jam today. I knew I’d be working with the Prepper Pro today. I waited until it arrived in the mail to make jam. When it was time to put it to use in the blueberries, I hesitated.

The  Appalachian Maple wood is treated with raw, organic coconut oil but I wasn’t sure the blueberries wouldn’t stain it. It’s such a beautiful piece that I didn’t want to take chances with it. I thought about wrapping it in Saran wrap but wasn’t sure it would stand up to two quarts of blueberries without slipping. I opted instead for a zippered sandwich bag. It worked perfectly to protect the wood. 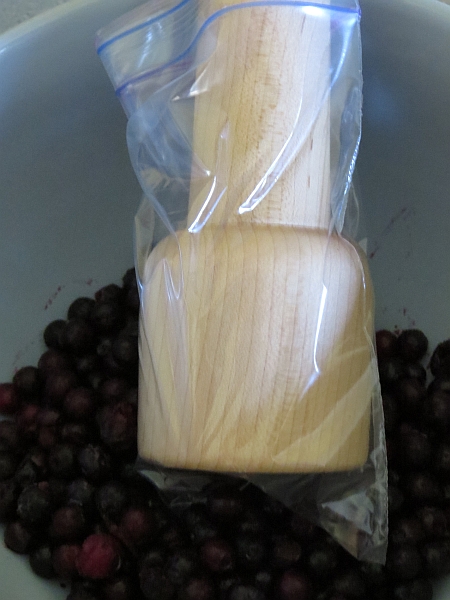 A zippered sandwich bag protected the Prepper Pro from being stained.

I won’t use the bag when I grind dehydrated Chanterelle mushrooms into powder or when grinding herbs. I’ll be pulverizing wild mint later this week. The large end (pictured above) of the Prepper Pro fits into a wide mouth canning jar. The smaller end fits into a small mouth jar. As I used it I thought of more ways I’ll use this new tool of mine. 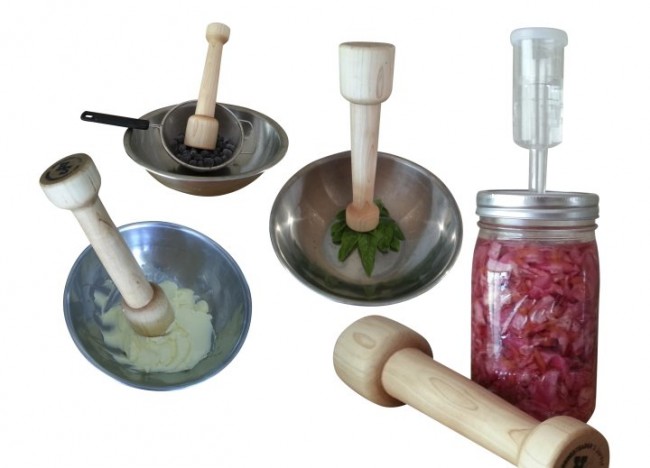 The Prepper Pro is another of our new products that was designed by Jerri, owner of Homesteader’s Supply, and is being made locally from locally sourced Appalachian maple trees. It’s well balanced, smooth as can be, and fits comfortably in my hands.

You can purchase the Fermenting Kit that comes with: 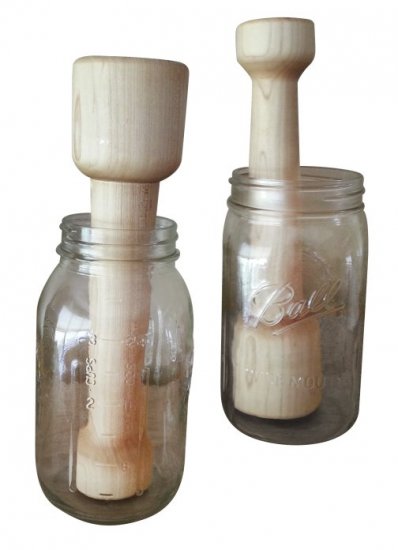 I’ll be mashing strawberries, raspberries and blackberries I’ve frozen to use later. There are always herbs to grind, both fresh and dehydrated. And I think I’ll give a grind or two to my loose, dried tea blends to wake them up a bit before putting them into the tea ball. I’ll be using this for more than packing my jars when I make sauerkraut. I washed the Prepper Pro when I finished using it, applied more organic coconut oil, and put in easy reach on the shelf. This is going to be used often.

And I’ll be adding the Prepper Pro to a few Christmas baskets this year. I have friends who’ll put it to good use!