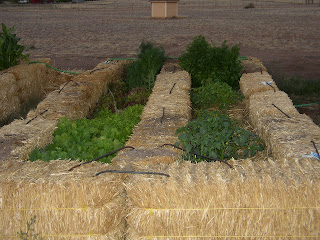 A few years ago I had about 40 straw bales hanging around from a straw bale wall project that never did happen. I decided to build a series of raised beds with them for my garden. I set up beds that were 4 bales long and 1 bale wide – then filled the rectangle with compost that my cows and chickens had shared through out the previous year. I had the best crops out of any garden that year!!! I was going to do a similar set up this year until I did some research on straw bale raised beds and found many homesteaders actually growing their veggies in the bales themselves rather than using the bales to hold the dirt in place! 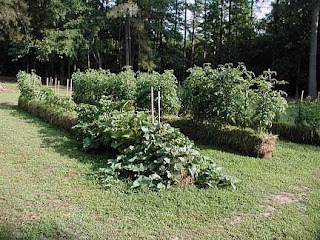 ps! The picture to the right I found on Google to see how plants looked growing from straw bales. Apparently, by soaking the bales, adding a compost tea (which I’ll share the steps for when I do it) and then cutting a small planting hole in the bale to add small amounts of soil for a growing medium… add the plant and get ready to harvest!!!

I’ll take pictures and post as I progress, sharing with you the success and failures in the project!