What to Grow in the Garden – Pumpkins and Winter Squash

Pumpkins and winter squash can be space hogs in a garden but oh aren’t they fun to grow! I have some creative ways to grow them without losing garden space you need for more productive vegetables. 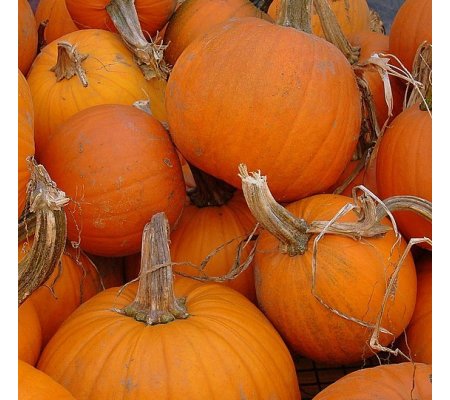 Many varieties of pumpkins and winter squash need long growing seasons. Choose your varieties according to the average number of frost free days you have. You can push the number of days on each end by using HotKaps, IRT and low tunnels and gain a week or two. You can buy yourself a little more time by starting the seeds indoors in large pots three weeks before transplanting. This gives your seedlings time to form their first true leaves before you put them out but it’s a short enough time to keep the seedlings from becoming root bound. Root crops are fussy about having crowded roots and transplanting so be gentle.

Pumpkins and winter squash can be grown in mounds or rows. Mounded soil warms faster and provides better drainage. Disturbing the soil to make mounds also helps slow cutworm damage.  It’s more time consuming than planting a straight row but the trade off might be worth the work.

Pumpkins and winter squash are very heavy feeders. You’re going to need rich soil or a lot of fertilizer. I dig a hole two feet deep and fill it with compost. If you’re planting outside of the garden you’ll want to save the soil in case you want to fill in the hole later. If not, you can use the soil in a raised bed or simply spread it out in the garden. Build a mound on top of the hole. By the end of the growing season the mound will have sunk and become not much more than bump. Compost is temporary.

You can use similar methods on porches. I have heavy nails hidden under the roof on my back porch.

If you have limited space for a garden you can choose varieties with shorter vines or bushing habits, or find a place to grown them vertically. Fences work well. Add a planter bracket to the top edge of each fence post. Cut sturdy twine one foot longer than the distance from the ground to the bracket. Tie the twine securely to the bracket. Transplant one seedling or two seeds under each bracket. If both seeds germinate you should pluck the smaller/weaker seedling when they are about a month old. Train the vines to attach themselves to the twine. All you should need to do is let the vine touch the twine. Prune excess vines as they spread to concentrate growth in two or three pumpkins per vine.

Cattle or hog panels can be braced and bent into an “n” shape. Plant the seeds or transplants on each side and allow them to grow across the panels. It makes a fun space for for kids to get in out of the sun when the vines cover the panels.

I must have dropped a winter squash seed or two under a young black cherry tree one spring. For reasons I forget now we didn’t cut the hay that year. In the fall, after the leaves started to fall, I noticed a bright orange blob in the eight foot tall tree. And then another blob, and a third blob. Bright orange winter squash decorated the tree. I’ve made the tree a yearly base for the winter squash now even though it’s now 15 feet tall. Doesn’t everyone use a ladder to harvest squash now and then? 😉 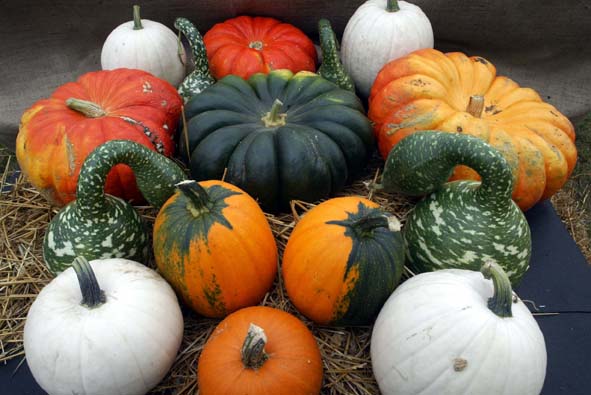 Your pumpkins and winter squash are ripe and ready to pick when the stem is drying and woody.  Cut the stem close to the vine, brush dirt off and if possible, allow them to dry outdoors in the breeze. I set mine on pallets under a canopy so they sun doesn’t hit them. Throw a tarp over them if there’s going to be a frost.

If your pumpkins and winter squash aren’t ready to be picked when there’s going to be a frost you can protect the plants that are on the ground with tarps. You can try clothes pinning tarps or at least a sheet or two over vertically growing plants. Warmth from the fence post will help protect the plants with the help of a covering.