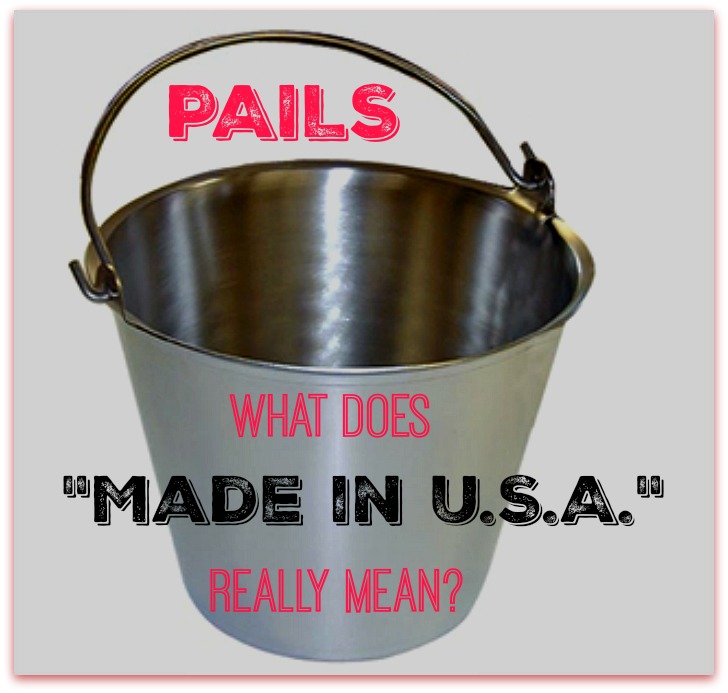 There’s a big difference between our American-made stainless steel milking pails and others that just claim to be made in U.S.A.!

When a product is marked “Made in U.S.A.”, you’d think it was made in the United States from start to finish, right? But that’s not necessarily the case! Some manufacturers apply the “Made in U.S.A.” label to products that were made offshore, but in an American-owned factory. Others source their parts from other countries, assemble them in the United States, and then claim the product is American made. And all of these practices are perfectly legal!

How our Milking Pails are Made

You’ll find other companies selling stainless steel pails that cost less than ours. Initially, you might think you’ll be saving money if you buy theirs instead. After all, in the photos, their pails probably look a lot like ours. And those companies claim their pails are “Made in U.S.A.” too. So, what’s the big difference? Why should you pay more for ours when it looks like you can get the same thing from another company for a lot less?

Well, looks can be deceiving! And so can marketing practices.

You already know that the “Made in U.S.A.” label can be misleading. Chances are, those other pails were made offshore; or, the components used to assemble them came from a source outside the U.S. Either way, they weren’t made here from start to finish. We think that’s important, and our fellow Americans agree.

Even though the milking pails other companies sell can look similar to ours in photos, we assure you, their quality is not nearly as high. But we don’t expect you to take our word for it. We want to empower you with information, so you can see the difference for yourself.

How to Determine the Quality of a Pail

One of the keys to determining the quality of a milking pail lies in knowing what type of stainless steel was used to make it. You can find this information in the product description. Look for a pair of numbers like “300 18/0 steel.” Our American-made pails are manufactured using “304 18/8 steel.” Let’s take a look at what these numbers mean, starting with the first one.

The 300 series number indicates the relative hardness of the stainless steel. Don’t be fooled if the description simply states “300 series.” That’s a trick marketers sometimes use to hide the fact that the product is made from a lower grade, such as 301. You won’t find another milking pail with a hardness grade as high as ours (304).

You can determine the chromium and nickel content of stainless steel by the other numbers in the description. For example, you might see 18/8 (18% chromium/8% nickel) or 18/0 (18% chromium/0% nickel). Products graded 18/8 are more durable and have more rust resistance than 18/0 products. That’s another reason why our 18/8 milking pails cost more than the lower-grade pails our competitors are selling.

Our pail appeared twice as a “Martha’s Pick” in Martha Stewart Living Magazine! We got our first mention in the September 2010 issue, and our second in the March 2012 issue. Martha promoted it as the “best and last pail you’ll ever need to buy” and recommended it for holding your cleaning products.

Why Our Milking Pails are Better than Other Brands

One of the major reasons why we sell these higher-quality pails instead of the less expensive ones is because they hold up better. We’ve tried all sorts of pails for milking our cows on the Homesteader’s Supply farm. All of them, except for the kind we sell today, were manufactured offshore or assembled from parts that were procured from a source in another country. The quality of the construction was lacking in the other brands, too. All the other pails had thinner walls than ours, and even the handles were thinner. None of the other brands were strong enough to withstand the rigors of daily use on our farm.

When we found an American-made product that was superior to all the others we tried, we started selling it to folks who were hand-milking their farm animals. Our pails are the strongest on the market. And because they’re made from a single piece of steel that has no welds to break, they are more resistant to bending and cracking. And because our pails have no welds, they will never rust at weld points like some other pails do. Our milking pail will hold up, even if an animal should kick it, or step back into it. And, because they contain nickel, our pails are rust resistant and look brighter and more polished than the cheaper brands.

After promoting the benefits our stainless steel milking pails for so many years, we now have food and agriculture industries purchasing them!

Why You Should Buy Your Pails from Us

So, if you’ve ever wondered why our milking pails cost more than the similar-looking pails sold by other companies, now you know. It’s because they are sturdier, rust resistant, bend resistant, break resistant, and easy to clean. Taken together, these qualities mean our stainless steel milking pails will last longer and serve you better than any other pails on the market. You get a lot for your money when you buy a pail from us. And, you will save money in the long run because ours will be still going strong long after the cheaper one has kicked the bucket.