Seaweed in the Garden

I’d heard about using seaweed in the garden. It was supposedly a miracle cure. It helped turn dirt into soil (dirt is dead but soil has living organisms), they said. It helped control blight on tomatoes, they said. I wondered if “they” knew what they were talking about. Living near the coast, it was worth a trip to pick up seaweed. Even if it didn’t live up to the claims, it would at least add some organic matter to the soil in a brand new garden.

Joining up with Maple Hill 101! 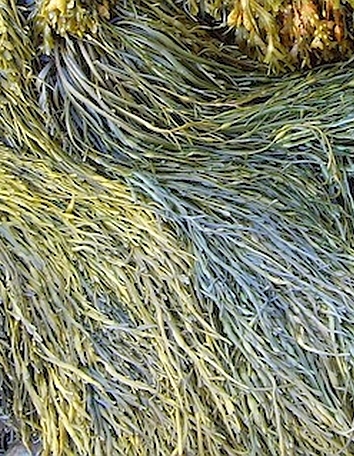 The first thing I needed to do was call the town office to find out what I am allowed to pick up. Laws vary from state to state and town to town. On the third call I learned that rockweed washes up on the public boat landing so heavily that it gets tangled in boat trailers. The clerk told me to go at low tide and gave me the time. She also gave me a list of things to take with me to make getting seaweed for the garden easier:

We can gather rock weed lying on the beach. We can’t take any seaweed attached to rocks. I went on a weekday when the beach wouldn’t be as busy. It didn’t take long to fill the back of a friend’s truck, and we gathered it all from around the boat landing. I see why trailers get tangled up. It was dense, wet and heavy.

Seaweed is full of micronutrients that improve the soil. I made seaweed tea by filling a five gallon bucket half full of seaweed and topping it off with water. I left the cover on for a week. Stand back when you open the bucket. The “aroma” was strong because I left it in the sun. Next time I’ll set it in the shade. Some of the yellowing broccoli and cauliflower plants improved a few weeks after I mulched them with seaweed and watered with seaweed tea.

I added a layer of seaweed to the compost pile. It’s not high in nitrogen so it didn’t give the pile I hoped for, but the added nutrients to the finished compost were worth the effort.

Mulching the tomato plants is said to help prevent soil born blight because it keeps water from splashing blight spores onto the plants. We didn’t have an outbreak of blight last year but the tomatoes sure did do well. I’ve been to the beach again this year to get more seaweed. I planted the tomatoes in the same spot as last year by pushing the seaweed aside to plant the transplants. I do believe there are a lot more blossoms than last year’s plants have!

I wanted to rototill the seaweed into the soil but remembered the warning about trailers, and I knew it would be a tangled mess in the tines of the tiller. It didn’t break down by the end of last summer but there wasn’t a lot left on the surface this spring. I turned it into the soil with a garden fork.

A couple of things to think about:

If you don’t live near the coast you can still use seaweed in the garden by purchasing it as an additive. It seemed expensive to me up front but you don’t need a lot so overall, it’s a good investment in plant and soil health and added nutrition to our food. se