There’s nothing like finding a steaming hot bowl of soup waiting on the table when you come in from the cold. The Indian-inspired flavors in our Curried Squash Soup will warm you up right down to your toes, and the aromatic spices will make your tastebuds tingle!

Read on for step-by-step instructions and special tips from the Chef!

First, a word about coconut oil…. 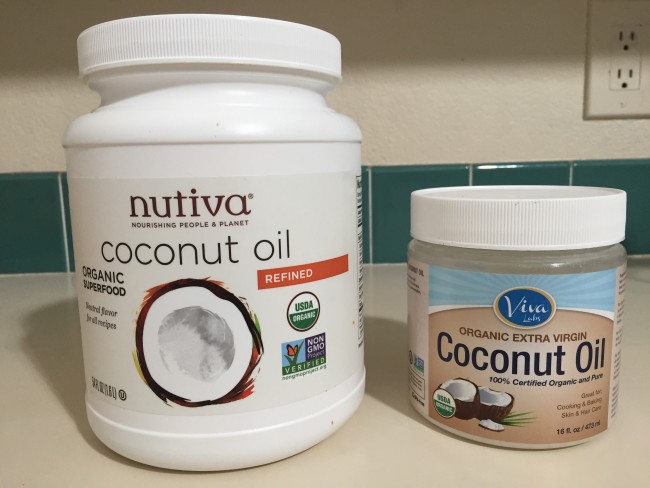 Okay, ready? Let’s do the prep work first. Set the oven to 400°F and bake the squash until the flesh is soft when pierced with a knife. The oven doesn’t need to be preheated, and it’s not necessary to peel or seed the squash before baking.

When the squash has cooled enough to handle, remove the peel and seeds. Cut the squash into chunks. Don’t be concerned about making the pieces uniform in size because everything will be pureed at the end. 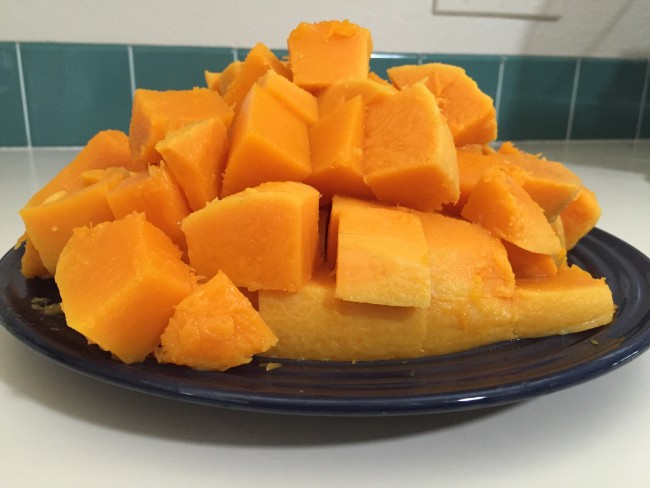 Now, chop the onion and mince the garlic and ginger. 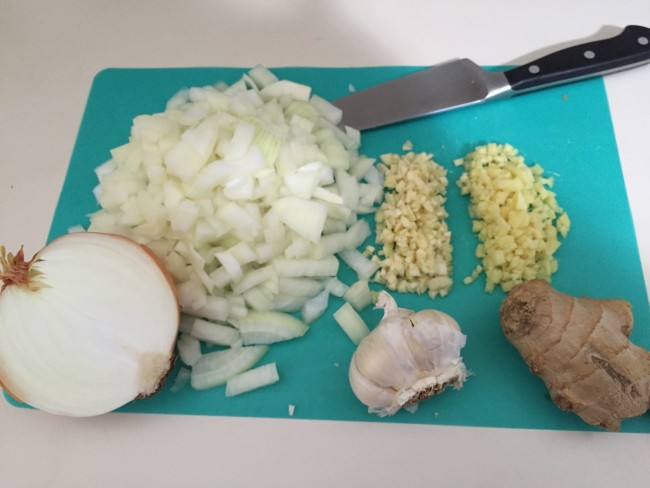 Let’s take a closer look at the garlic… 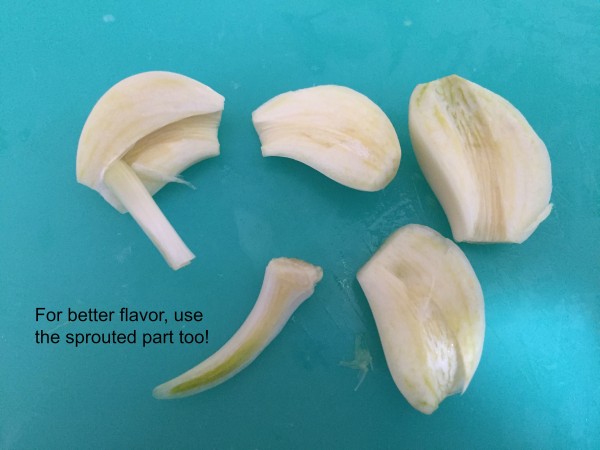 Okay, so far so good. But wait…we need to prep one more ingredient! Count out your cardamon pods. If you really love the flavor of cardamon, use 10 or 12 pods. Otherwise, use about 8. Place the pods in a mortar and crush lightly with a pestle to release the seeds from the hulls. Don’t press so hard that you crush the seeds! We want them whole; otherwise, the cardamon flavor will overpower the soup. Using your fingers, pick out the broken hulls and discard. 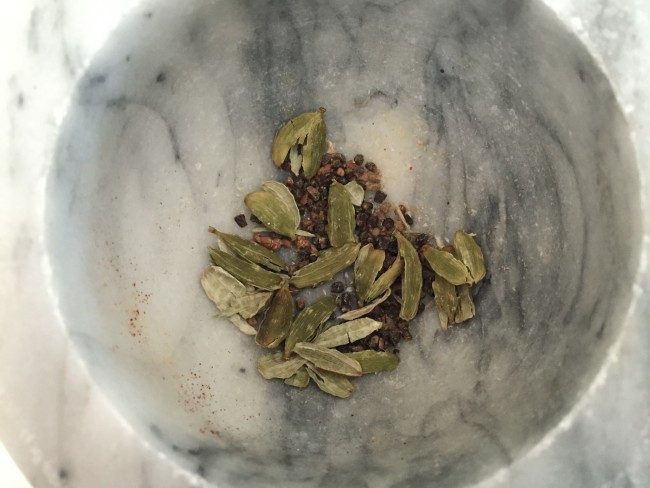 Now you’re ready to start the soup! Melt about 2 tablespoons of coconut oil in a large soup pot like this one.

Add onion and saute on medium to medium-high heat until translucent. Add some salt while the onions are cooking. About a teaspoon is a good amount to start. Reduce heat to medium. Add garlic and ginger and saute for a couple more minutes, being careful not to scorch the garlic.

Some of the spices need to be toasted before adding to the soup, so let’s do that while the onion mixture is cooking. Preheat a small cast iron skillet this one on medium to medium-high heat. The higher the heat, the more closely you’ll need to watch the spices so they don’t burn!

Add a little a coconut oil and tilt the pan to coat it as the oil is melting. When oil is hot and the skillet thoroughly coated, add your pre-measured fenugreek and cumin seeds. You’ll want to work quickly so they don’t burn! Move the spices around with a spatula until they begin to release their aroma. When the spices start to look ever-so-slightly toasted, quickly add the bay leaves. 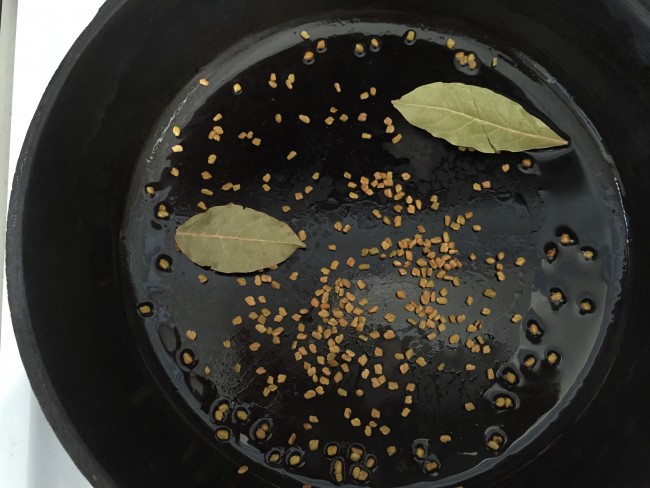 The bay leaves will brown very quickly, so be ready to remove the skillet from the heat and scrape the spices out of the pan before they burn. The entire toasting process takes about a minute. (Actual cooking time varies, depending on the amount of heat you apply to the pan.) Just watch it carefully and you’ll be fine!

Now, add your toasted spices to the onion mixture. 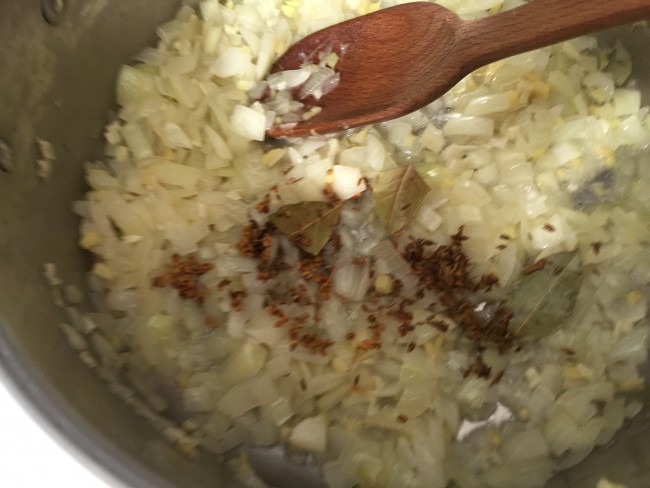 Next, add the broth or water. (If using low-sodium broth or water, you’ll need additional salt to taste). Then add the squash chunks, curry powder, and cardamon seeds. Bring to a boil, reduce heat to low, cover, and let the soup simmer for about 45 minutes. Stir every 15 to 20 minutes to keep it from sticking to the bottom of the pot. 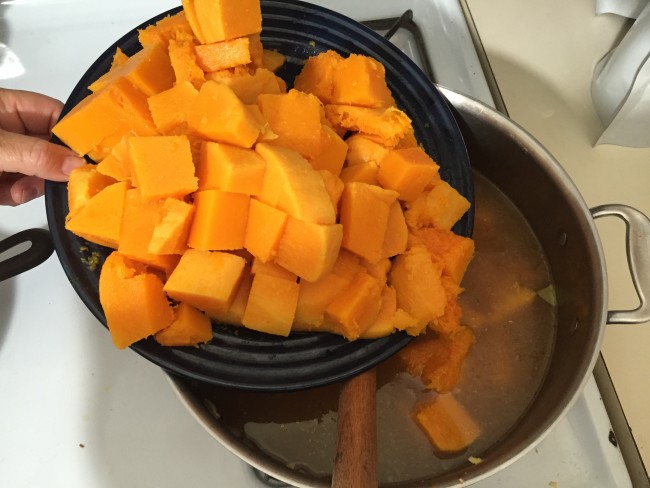 After 45 minutes of cooking, remove the bay leaves. If they broke, be sure you get all the pieces out! Then stir in the coconut milk and cook for a couple more minutes until everything is heated through. 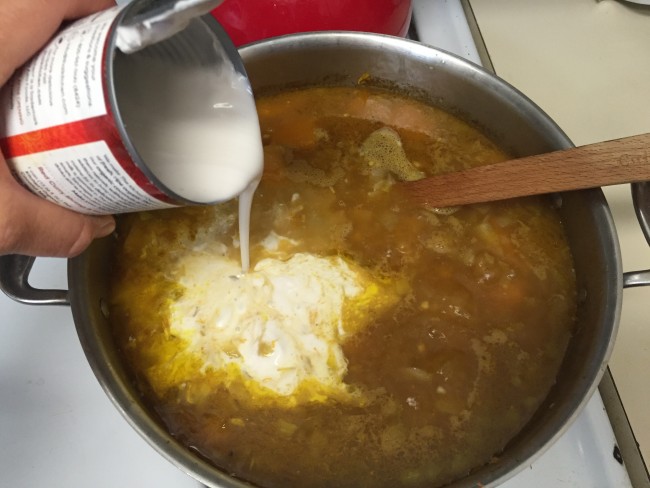 When the soup is good and hot, take the pot off the burner. Using a stick blender, puree the soup until it’s smooth. Taste and add more salt, if necessary. 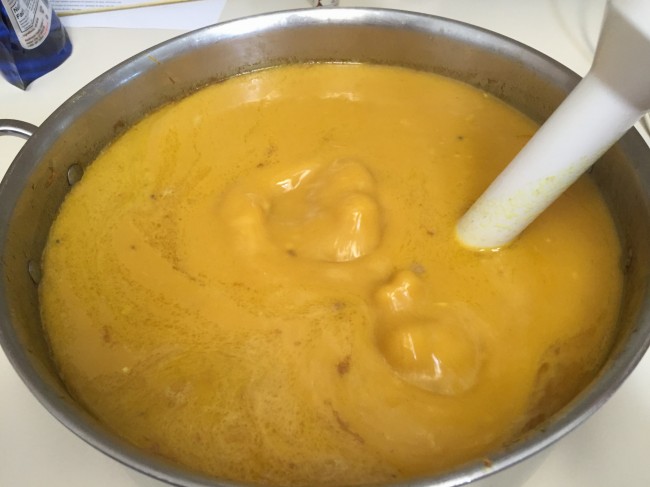 When ready to serve, ladle into individual bowls and sprinkle each with chopped cilantro. Enjoy!